Also, the marine creature with a beak!

Well, can anyone guess who that could be? It is the awkwardly shaped, tentacles spreading Octopus. Everyone knows about the basic structure of an octopus – it has a balloon like body with no rigid skeleton and eight long arms / tentacles which have many sucker disks.

However, there are many more amazing facts about this aquatic creature other than its odd- shaped body.

Although an octopus looks like a monster prowling around in the sea, actually it is a shy creature and moves away from human beings. It is more intelligent than other aquatic animals because it has a well-developed nervous system. Studies have shown that octopus can make use of tools and they can unplug a container to reach their prey. They also collect shells etc. to create a fortress around their hiding place. 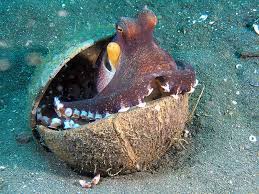 Octopus can make use of a coconut shell for hiding.

If a tentacle or arm of an octopus is broken, it can slowly grow back again. Octopus are Cephalopods, which means, the one whose feet start from its head.

Even though it may look big in size, the body of an octopus is so flexible that it can pass through very small holes. If it is kept in confinement, it can escape through the smallest aperture or slit. Eel is one of the enemy of an octopus. Because of its slender body, an eel can probe in the holes where the octopus hides.

When confronted by an enemy, the octopus discharges a type of ink which creates a smoke-screen. This confuses the enemy, who attacks this cloud of ink and in the meanwhile the octopus escapes. A scientific analysis of this ink states that it paralyses the sense of smell and sight of the enemy.

Chameleon Of The Sea: An octopus has pigment sacs or chromatophores. With the help of these, it can control and change its colour. It can turn from blue – green to brown to red to white in quick succession. The octopus uses this to startle the enemy and escape from it. Octopus can instantly match the colour, pattern and also the texture of its surroundings, thus making it difficult for the enemy to spot it.

Octopus has got a parrot-like beak hidden in its mouth. With this beak it can make a hole in the shells of crabs or other prey. The octopus uses the suckers on the tentacles to suck in its food. With its beak, the octopus can give stinging bites. It has a set of glands in its mouth which secretes toxin. This toxin either kills or paralyses the enemy. The Blue-ringed octopus of Australia secretes a deadly poison which can kill humans within minutes of stinging.

The octopus lays eggs which look like a cluster of elongated balloons. Mother octopus guards the eggs and continuously washes them to keep them free of fungus.

The eye of an octopus is very much similar to the eye of human beings. They possess three hearts. They are quick swimmers and can dart swiftly by ejecting water through a tubular siphon below its head. They are famous for this ‘Backward Swim’. Another great ability is to change their body shape to mimic the shapes of other aquatic creatures.

So, isn’t this creature simply amazing?

8 thoughts on “The Intelligent Chameleon Of The Sea”