Anyone would naturally say, what is so special about a crow, they are so common. And then, everyone has surely heard the story of The Clever Crow.

But this is not any story. These are facts, which have been proved scientifically.

The New Caledonian crow is capable of manufacturing  tools from naturally available materials and use these tools for retrieving food from nooks and corners.

New Caledonia is an island in the Pacific Ocean and these crows are inhabitants of its main island Grande Terre (also, one of the Loyalty Islands, Mare Island)

The scientific name of this species is Corvus Moneduloides. It is medium sized crow and completely black in colour (even the beak, feet and legs are black). The shape of its beak is slightly different; the end of the lower mandible is tilted upwards, so it appears somewhat like a chisel. This shape probably helps in holding the tool or may be, this shape evolved due to the pressure created by holding a tool straight.

These crows are known for using parts of plants to manufacture tools which they use for capturing hidden prey. They make use of Pandanus leaves — the crows tear off strips off the edge of Pandanus leaves. These leaves have serrated margins, so the barbs of the leaf margin act as hooks. The crows use these strips or small twigs fashioned as hooks and probe the crevices for insects, larvae and grubs. They agitate the prey which then bites the disturbing  tool. The crow then withdraws the tool with the prey still sticking at the other end. Grubs caught in this manner are staple diet of these crows. 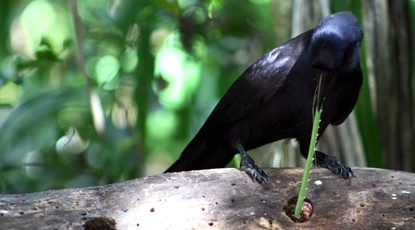 Sometimes these crows even manufacture these tools or hooks, instead of using readily available barbs. When the crows tear the strips off the leaves, they can do so in three different types – narrow strips, wide strips and multi-stepped strips. The last ones are made by step-wise snips and tears, making the strip broad at one end and narrow at the snipped end. 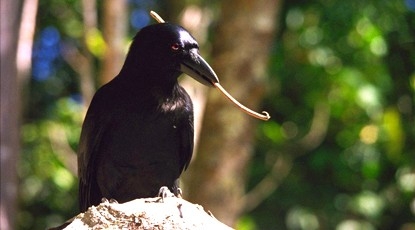 Studies were conducted at the University of Auckland to understand the techniques of these crows. Various patterns of tool making and the ability of these crows to pass on the invention to the others in the groups, was established in these studies.

The scientists at the University of Oxford studied and observed a pair of New Caledonia crows. The observations proved that these crows can make tools from materials which are new to them (not encountered in their natural habitat). These crows could bend a straight wire into a hook and use it as a tool to lift a small bucket of food from a vertical pipe.

The same experiments were repeated and 9 out of 10 times these crows bent the wire to form a hook. This proved an intentional tool manufacturing : a rare occurrence in the animal world.

Only the primates like chimpanzee are known to craft tools or make use of tools. The New Caledonia Crows are the only birds that have shown such skill or intelligence of crafting tools from unknown material like wire.

[A series of studies were conducted to decide the cognitive ability of these crows. It was found that they are capable of meta-tool use, that is, using one tool on another tool to accomplish the task. The crows were given food in a box and and short stick that could not reach the food. But this short stick could be used to retrieve a longer stick from another box and this longer stick could reach the food in the box. So the crows were required to understand that a tool can be used to retrieve another, more useful tool. Instead of going directly towards the food, six out of seven crows, in their very first attempt, went first to fetch the proper tool and only then went for the box of food. This behaviour or degree of intelligence was earlier observed only in primates.]

New Caledonia has issued a special stamp in honour of this Clever Crow.