A National Park that floats! — There is only one such National Park in the world, The Keibul Lamjao National Park. But it is not some man-made amusement park, it is an amazing creation of the nature.

The Loktak Lake at Moirang in Manipur State (India) is the largest fresh water lake in the northeast parts of India. The special feature of this lake is the innumerable floating islands dispersed in the lake. In local language, these islands are called as ‘Phumdis’.

These islands or Phumdis are mixed mass of vegetation, soil and decomposing organic matter. The largest of the Phumdi is about 40 sq. Km. in area and this Phumdi houses the world’s only floating national park.

The distinct feature of this National Park: Too deep to be marsh-land and too shallow to be a lake.

Because of the floating Phumdis, the size of this national park is not constant. The peripheral areas get submerged during the monsoon season. After a few days it emerges and floats to the surface and separates from the ground.  At this time, the animals of the park move to the higher hilly areas. The depth of the Phumdis vary from 1 foot to 4 feet. around 20% of its thickness floats above the surface of the lake and it can support the weight of even large mammals.

The Phumdis are of two types –  Ataoba, which are floating ones and Aruppa or the sinking ones.

The National part is the habitat of the endangered species of brow-antlered deer, which is called as Sangai deer in the local language. This Sangai is Manipur’s State animal. This deer walks with a dainty gait over the floating marshland and so it is also called as the ‘dancing deer’.

Many other types of animals, which are not commonly seen in other places, are also found on this floating national park. animals like hog deer, large Indian civet, bamboo rat, golden cat. keel back tortoise, viper krait, water cobra, banded krait, common otter are inhabitants of this park.

Some species of macaques (stump tailed and Hoolock gibbons are found in this place. Other rare creatures seen here are the blue crested lizard and endangered species of Python molurus.

Some rare birds like the black eagle and Shaheen falcon as well as different varieties of hornbill species are seen in this floating park.

Apart from housing this unique national park, this Loktak lake is also the water source for generation of hydropower, it helps in irrigation and drinking water supply. Many fishermen of this area depend on this lake for their livelihood.

The other islands, (apart from the national park and the floating Phumdis) in this lake are Sendra, Ithing and Thanga islands.

The central zone of this lake is comparatively free of phumdis and originally it was main open water zone. However, the villagers have now created artificial phumdis (called athaphums) for fishing. 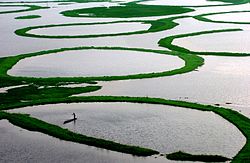 Earlier the Phumdis floated during the flooding or rainy season and settled down at the bottom of the lake during the dry season. Thus the phumdis received nutrients and minerals from the lake bed. But now, due to the Loktak Multipurpose project and Loktak hydro electric project, the water is constantly maintained at a high level, even during the dry season. This has disturbed the natural cycle and has affected the growth of vegetation on the phumdis. This is not sufficient to support the animal life in the floating park. Also, the lake water pollution (due to various reasons) has affected the quality of water, consequently affecting the flora and fauna of this unique Floating National Park.

39 thoughts on “A Floating National Park!”