Commonly we know only about the honeybees collecting honey or the butterflies thriving on the nectar. There are also species of ants that collect honey. While the bees store their collection in the bee-hives, these ants have a unique way of storing the honey — they store the honey in their bodies. 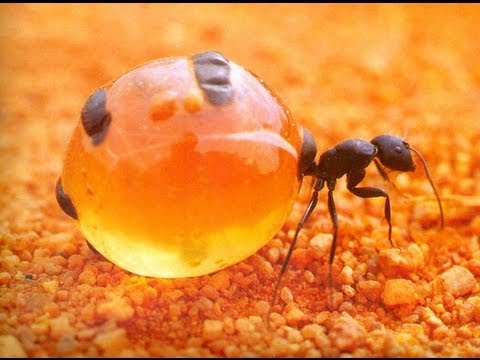 These are honey-ants, also called as honeypot ants. They act as living storage units.

Creatures living in the arid and difficult conditions of desert (mainly in US, Africa and Australia) need special adaptations to survive the harshness of their surroundings.  Some ant species living in the desert region are such modified insects. Species of Myrmecocystus and Camponotus are found to act as honey storing ants. 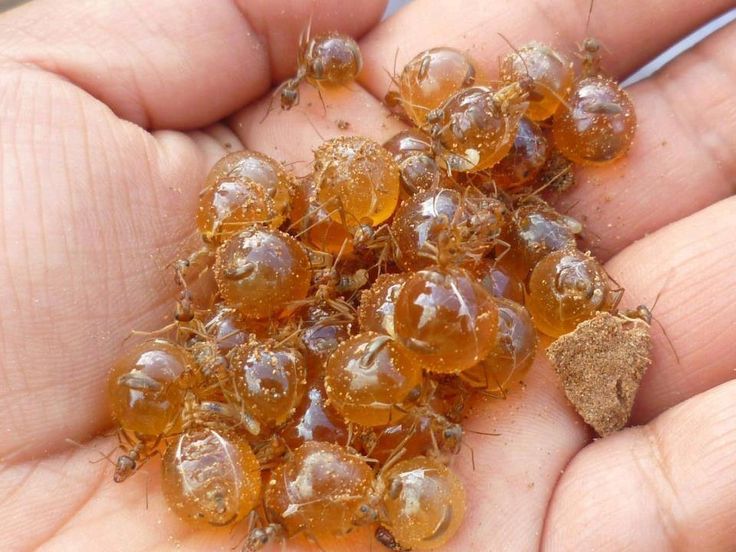 Some of the ants of these species have flexible abdomens. They feed on the food provided by other worker ants. The food comprises of honey and nectar of the desert flowers, plant sap, body parts and juices of dead insects etc. After constant feeding their elastic abdomens bulge with the fluid (food) to a grape size.

These fully engorged, rotund ants are called repletes or pleregates or rotudus. These swollen ants find it difficult to move and they cling to the roofs or the ceilings of the underground nests. These food storing ants are found in the deepest parts of the nest.

In a honey ant colony, these repletes generally form nearly half of the population of the colony. When the food is scarce, other worker ants stroke the antennae of the repletes, then the repletes regurgitate the stored liquid — thus feeding the colony.

A honey ant colony has a queen, a few male ‘drones’ and a few princesses. Majority of the ant population comprises of sterile females and they act as workers, soldiers and honey ants.

Some of these species are edible and people in some parts of the world consider these as a delicacy. (You can watch a video Here)

These honey ants are important for the ant nests and often there are wars among the ant colonies to capture these live food storage tanks.