Robber crab is another name for the Coconut crab.  They are also known as Palm thief. The scientific name is Birgus latro and the coconut crab is the only species of the genus Birgus. This species is a terrestrial hermit crab.

The coconut crabs are the largest land living arthropod and the largest terrestrial invertebrate on the earth. An adult coconut crab can grow up to 1 meter of length from leg tip to leg tip and weighs up to 4 to 4.5 kg. Their life span is about 60 years. The colour of their carapace varies from orange-red to purple-blue depending on their location. 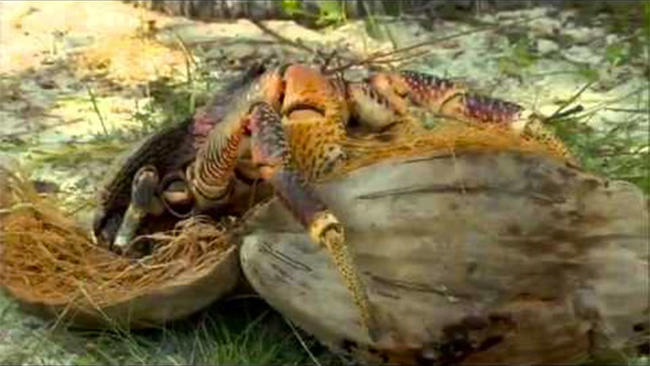 A coconut crab has ten legs; the front-most pair has large claws and the left claw is larger than the right one. Each pair of legs has a distinct function. The front claws or pincers are so powerful that they can lift about 66 pounds of weight and can pinch with 750 pounds of force.

These coconut crabs are mainly found on the islands of Indian Ocean and Pacific Ocean (wherever there is profusion of coconut palms). These terrestrial crabs show quite a few adaptations to life on the land. They cannot survive in water and will drown if immersed in water for more than one hour.

Although the species is called as Coconut Crab, coconut is not their only or main diet. They eat fleshy fruits, nuts, seeds. They are omnivorous as they eat any organic matter including dead animals and crabs of their own species (cannibalism).

These crabs can climb trees. If it is far from its burrow, it uses climbing as an escape from predators like large sea birds or cannibalism by bigger crabs. There is no film evidence of this crab climbing to pick coconut from the palm, but it can be seen cracking open a fallen coconut. 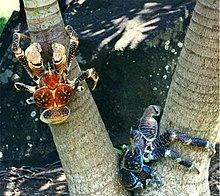 The coconut crabs take a coconut from the ground, remove the outer husk with the help of their strong pincers and make holes in the coconut shell to reach the flesh inside. The are also known to take the husked nut and climb up a tree up to 10 meters and drop it down to break it. These crabs descend a tree by falling down and can survive a fall of 4.5 meters.

The females lay their fertilised eggs by the sea edge. When hatched, the larvae are like plankton for 3-4 weeks, then they find and enter an empty snail shell at the sea floor and return to the dry land. The juveniles use the protection of snail shells for their soft bodies while adolescents use coconut shells. The adults moult annually and during this period of 3 to 16 weeks they hide in a burrow to protect their vulnerable bodies.

They got the name Robber Crabs because of their tendency to carry away anything that lies unattended – this is related to their very strong sense of smell. They take away anything that remotely smells like food — including silver cutlery.

Adult coconut crabs have no known predators except other coconut crabs and humans. Hunting by humans has caused a great decline in their numbers.