[Please Note: I would like to state that I have not experienced / seen any of the facts mentioned here. I am curious about the various unusual phenomenon occurring in nature. I have only researched and compiled these facts together. The images and videos presented in this blog are not photographed by me. Thank you.]

There are a group of around 95 fish species found mainly in coral reefs, rocky coastal areas etc. These are distinct from other fishes because of their peculiar dentition. These are called as Parrot fish.

These fish species have numerous teeth and the teeth are placed on the outer surface of their jaw bones in a tightly packed arrangement. This formation appears like a beak of a parrot and thus giving it the name – Parrot Fish.

These fish species are found in the tropical and sub-tropical oceans, especially in the Indo – Pacific oceans. A beak-like mouth is one of the special thing, these parrot fish exhibit many different and peculiar characteristics.

The colouring and patterns on these fish vary a lot among the males, females and juveniles of the same species. (A lot of variation is also found in the sizes of different species). In some tropical species, the juveniles can temporarily alter their colour to mimic other species. 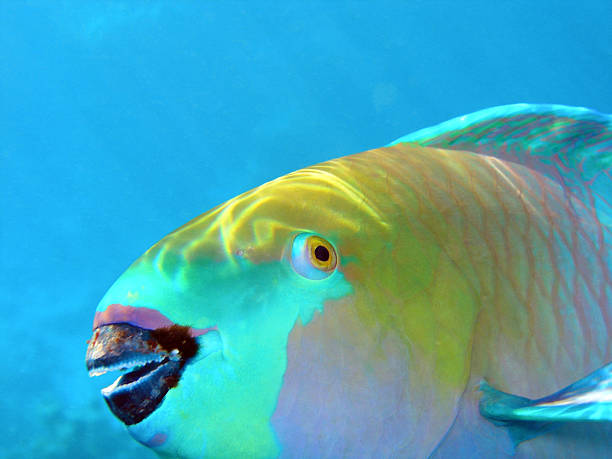 Parrot fish can change their sex throughout their lives. They are considered as sequential hermaphrodite (animal having both sexes one after other, in series), generally first as female and then changing to male.

Certain species of parrot fish secrete a transparent cocoon of mucous at night and envelope themselves in this cocoon. This mucous is secreted from an organ in its head. The cocoon probably hides their scent and protects them from nocturnal predators like moray eel. The actual skin of the parrot fish is covered with another mucous like substance which possibly helps in repairing body damage and in repelling parasites.

Parrot fish feed on the algae found on the coral reefs. The beak like teeth help in scraping the algae from the corals and rocky surfaces. Their teeth which get worn by feeding, keep growing continuously. The fish also possess pharyngeal teeth which help grind coral to get the algae-filled polyps inside it. The ground-up, undigested coral is excreted out and is found as sand in the areas of  their habitat. On an average 275 gm of sand is produced by one parrot fish in one day.

The diet and feeding of parrot fish is important for the process of bio-erosion. These fish are important for saving the coral reefs from being overgrown with sponges and algae, because it scrapes and cleans inshore coral reefs.

38 thoughts on “Multifaceted Fish With A Beak”